So recently I have been looking into using Docker to automate parts of my testing and deployment, Using my lightweight CEP component (https://github.com/foyst/smalldata-cep) that uses Siddhi under the covers as a basis to develop my skills in Continuous Integration / Deployment.

Currently using Windows 10 on my personal laptop and never one to give up a challenge, I finally got Docker Toolbox running on Windows with version 1.8.2, with boot2docker and Docker Quickstart Terminal.

My next goal was to configure Docker builds directly to my boot2docker VM using Spotify’s Docker Maven Plugin (https://github.com/spotify/docker-maven-plugin) as a step towards Continuous Integration / Deployment. The idea being whenever I run the deploy phase of my Maven build, a Docker image of my software would be built, ready to run immediately afterwards.

This is the maven configuration I used within my “runner” module’s pom.xml:

I was trying to run it within IntelliJ on Windows, and was getting the following error:

Reading the Spotify Docker readme on GitHub states that it uses the DOCKER_HOST environment variable to determine the location of the Docker Daemon, and if this isn’t set it uses localhost:2375. So I tried setting this to the IP of the VM.

Unsuccessful again with this error:

This hadn’t worked either. Next thing to do was ssh onto the boot2docker VM and do a “netstat -apn” command, to see what ports Docker was listening on 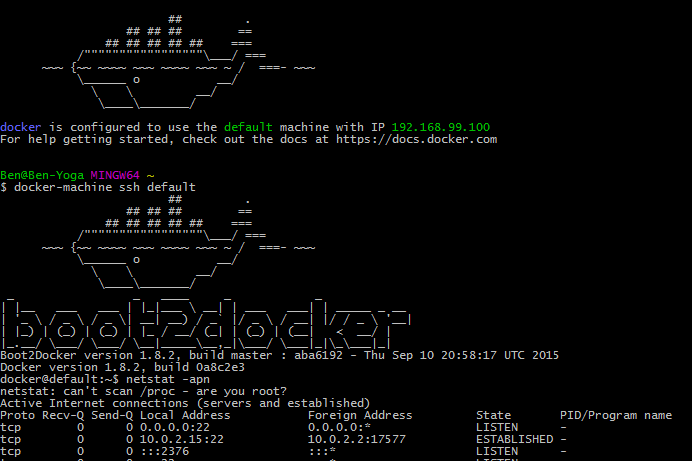 Docker was actually listening on 2376, not 2375! So after changing this I got back to the Socket write error from previous attempts.

A quick Google for this brought a bug up for the plugin (https://github.com/spotify/docker-maven-plugin/issues/51), mentioning other environment variables that potentially needed setting up, but at this point I didn’t know if they’d fix my specific problem, or even if they did what to set them to.

So next thing I tried to do was go back to Docker basics and build an image of my Spring Boot uberjar using a standard Dockerfile (completely outside of Maven):

Then from within the Docker Quickstart Terminal I was able to run this command within the folder that had my Dockerfile in it: “docker build -t foyst/smalldata-cep .”

This successfully built my image in my boot2docker VM, which I could then run with “docker run –rm -p 8080:8080 foyst/smalldata-cep”

Ok, so using Vanilla Docker build I could successfully create an image, happy days! So from there I moved on to running “mvn docker:build” from PowerShell…

Still an error. Then it occurred to me to try “mvn docker:build” from the Docker Quickstart Terminal:

Success!! So what’s the difference? Eventually it occurred to me that the Docker Quickstart Terminal must somehow be configured out of the box to communicate with the boot2docker VM. So I started focusing my search on that

Always review the documentation, this came in handy: http://docs.docker.com/engine/installation/windows/#from-your-shell

This allowed my to actually configure the shell of my choice (Powershell), and knowing how that worked I could then apply the same to my IntelliJ configuration. 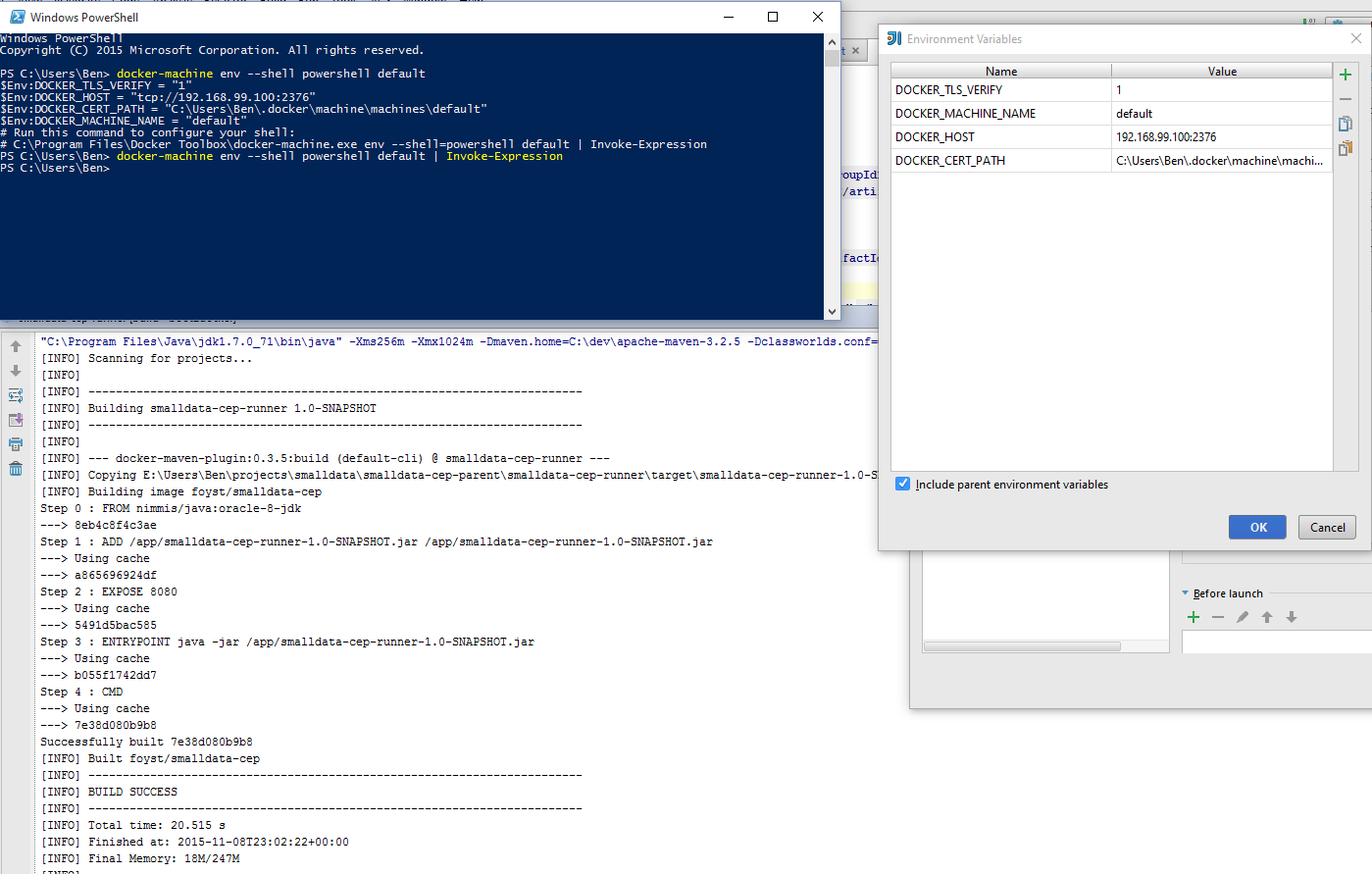 Using Docker in Windows is still quite a PITA, but now the client works natively on Windows and you understand what goes on behind the scenes it’s possible to get it working quite nicely.

Next I will be looking into automated builds and deployments using a combination of GitHub, Jenkins and Docker… 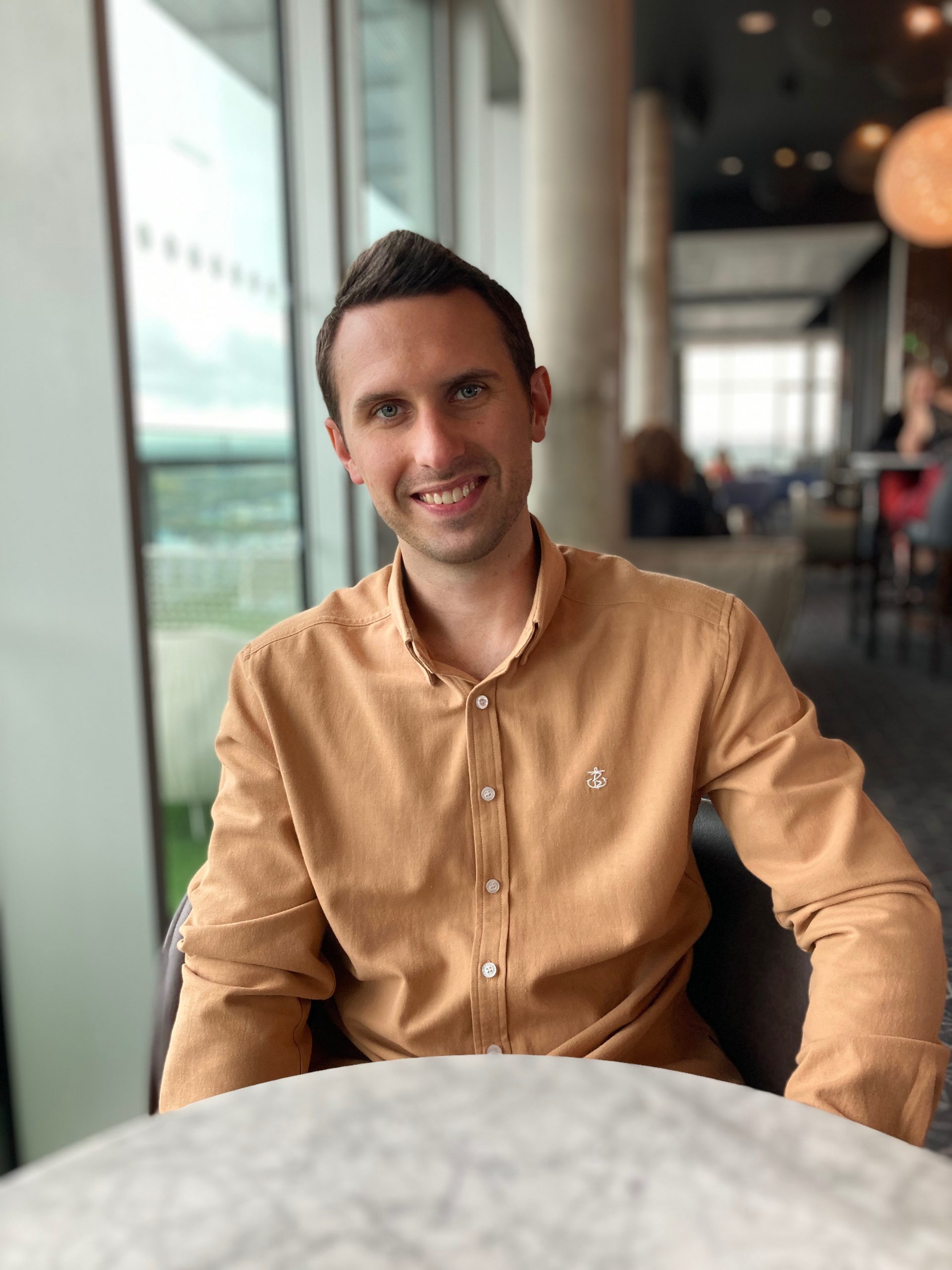